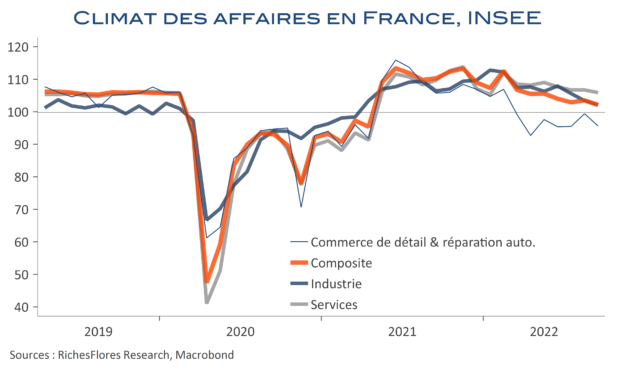 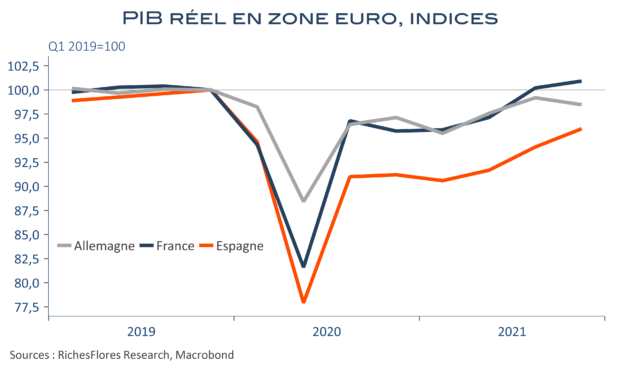 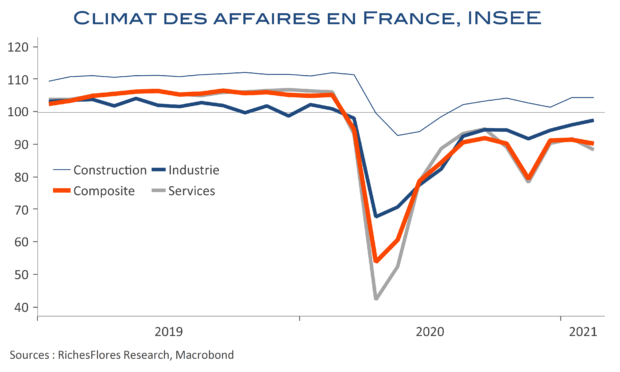 France is stumbling, Germany weakening, the U.S. wobbling, Brazil is down a match point and J. Bullard has promised us rate hikes by March… the summer is going to be a real barn burner! Will M&A activity be robust enough to continue to fuel investor confidence?

It’s looking like things are getting tight, considering recent economic developments and central banks’ bungled messages. Let’s take a closer look at the most disruptive factors from the week.

– Euro area: if Germany is a locomotive, is France the caboose?

– Beware of the impatience of certain central bankers

Distortions from the end of the year between PMI polls, foreshadowing recession, and INSEE data, mostly reassuring, have evened out. Good news for starters, as PMIs made up for their lag, the present convergence has become worrying: all surveys, across the board, paint a decidedly ugly picture.And for two reasons:

1) the return of consumer concerns,

2) the lack of an export recovery.

The whole picture is cause for concern. After zero growth in the first quarter, the downturn of the most recent indicators accentuates the risk of a fresh – and sustained – fall in economic activity. The more-or-less consensus forecast of 1 % French growth on average is now very “passé”. In fact, French growth will struggle to do better than 0.5% this year! This is very bad news, for France and the rest of the euro area.

Either eight or nine countries in the euro area are probably in the grips of deflation. In response to the situation, the direction of economic policy will play a decisive role. It’s a foregone conclusion that the ECB will not take measures in the near term that will be aggressive enough to stem the onslaught of this plague. It will be up to fiscal and tax policies to take on this responsibility. By complying with the European Commission’s constraints, France risks plunging its economy into a deflationary abyss and with it, undoubtedly, all of the euro area.

Commodity prices: what we would like to see, what hints they are giving

We got off on a good foot this week, with some reassuring news for once: the likely decline in oil prices stemming from progress on negotiations to halt the development of nuclear weapons in Iran. As we are reasonably confident that this week’s agreement will have an impact of at least $10 per barrel, we decided to take a closer look at what is, at first glance, good news for the world economy.

So, why don’t we just take the news at face value?

Is France doing as poorly as everyone says?

Coming on the heels of last week’s dispiriting PMI data, the results of the latest INSEE survey are reassuring. Not only do the results debunk the scenario of a slide back into recession that some were quick to assert after the PMI release, but a detailed analysis even shows that there is reason for hope.

Although there are still legitimate concerns about the future of the euro area, the recession is definitely over. Like all such episodes, this one comes with a number of pleasant surprises. Here are the three main ones:

• The first and most significant surprise from the investor standpoint is a recovery in Europe’s auto industry, along with improved stock performance for the firms involved.

• The third, and possibly most important surprise—given the risks that Spain’s sluggish economy pose for Europe as a whole—is that spending by Spanish consumers is clearly trending upward.

While none of these surprises taken alone has enough weight at this point to convince us to make any major changes to our growth forecasts, they each help restore a modicum of confidence—perhaps even with unexpected repercussions.