END_OF_DOCUMENT_TOKEN_TO_BE_REPLACED

Summary – Current economic trends seem particularly favorable, but after taking a step back, we are inclined to be more circumspect than the consensus of economists on the outlook for 2018. Our worldwide scenario has changed little since September. Our global GDP growth forecast for 2017 remains the same, at 3.6%, and we have lifted our 2018 scenario slightly to 3.3% from 3.2%. Upward revisions to our 2017 estimates for the developed world offset the declines we project in emerging markets. Meanwhile, we continue to foresee a modest global slowdown in economic activity next year as a result of reduced US and Chinese growth.

In this context, and amid the structural changes underway, worldwide inflation does not look ready to accelerate. It should fall from 2 % on average this year to 1.8% next year, in the wake of declining raw material prices. With no inflation on the horizon, central banks will maintain their very accommodative bias. Restricted by a persistent flat yield curve, the Fed will have trouble carrying out the three key interest rate increases it has planned. The ECB will remain particularly conservative and is unlikely to have an opportunity to take a position on a future increase in key rates.

The dollar is set to disappoint and maintain pressure on other countries. Japan, now benefiting from a more promising environment, is probably the country best placed to absorb the market’s wariness with regard to the US currency. Our exchange-rate scenario remains unchanged from our September projections and includes a substantial appreciation in the yen.

In the short run, we think exposure to risk is still a viable strategy, so long as it is focused on developed markets. But the current environment requires investors to be ready to change direction at a moment’s notice. For this reason, we have developed a fundamental allocation to complement our short-term, tactical recommendations.

END_OF_DOCUMENT_TOKEN_TO_BE_REPLACED

Indeed, there was no shortage of upheaval this summer. Once again, the bond markets defied consensus forecasts and the dollar had the last straw, sliding 7% against the euro.

Global performance was rescued by emerging markets, but neither cyclical stocks nor European markets lived up to expectations, at least in euro terms. The situation looks very different in dollar terms, with European indexes solidly outperforming global ones.

END_OF_DOCUMENT_TOKEN_TO_BE_REPLACED

Helpful financial conditions and the removal of major political risks in Western countries are maintaining a healthy appetite for risk. The bull run has gone a long way, but seems capable of going further although the path ahead is increasingly strewn with pitfalls, requiring investors to watch out for a large spectrum of risks. 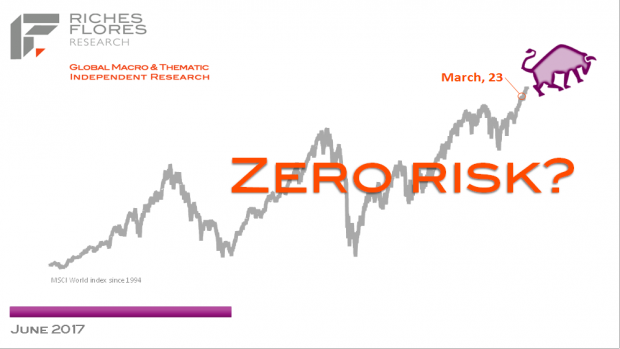 END_OF_DOCUMENT_TOKEN_TO_BE_REPLACED

The onslaught of bad news won out last week as global stock exchanges endured a heavy correction and investors retreated in a massive flight-to-quality. At a time when some observers already see a buy opportunity in the recent slide, we continue – given our view of the macro-economic and geopolitical situation – to take a protective stance in the near term. There are four main reasons behind this:

1- None of today’s geo-political conflicts (Iraq, Gaza Strip, in Ukraine-Russia or South China Sea) seem to be ending anytime soon. The multitude of conflict zones and the extreme complexity of the present situation could well indeed fuel investor risk aversion.

2- The European economic picture has taken a bad turn. The lack of domestic growth drivers, amid an environment of soft global trade, has trumped the economic recovery. Current forecasts are no longer tenable and news in the coming months is sure to lead the market to revise its forecasts on future growth markedly downward.

3- The ECB is behind the ball when it comes to fighting deflation. Its intervention, if it ever sees the light of day, will not have the same impact on the markets as Fed action, particularly for the banking sector where all signs point to a sustained downturn.

4- Anticipations of a Fed rate hike have diminished due to recent international developments, which helped in limiting the damage on the US equity indices. However, the postponement of Fed normalization cannot be perpetually seen as good news.

Given the wealth of evidence, the correction that started several days ago is likely to continue. Our recommendations remain:

Global growth slowing next year to 2.8% versus 3.2% this year

Growing instability on the forex markets

Downturn in the equity markets

The change in outlook weighs on earnings forecasts and cyclical stocks.

The S&P recedes to 1,600, the EuroStoxx returns to 300 points. Industrial equities take a hit, with the DAX squarely in the crosshairs. 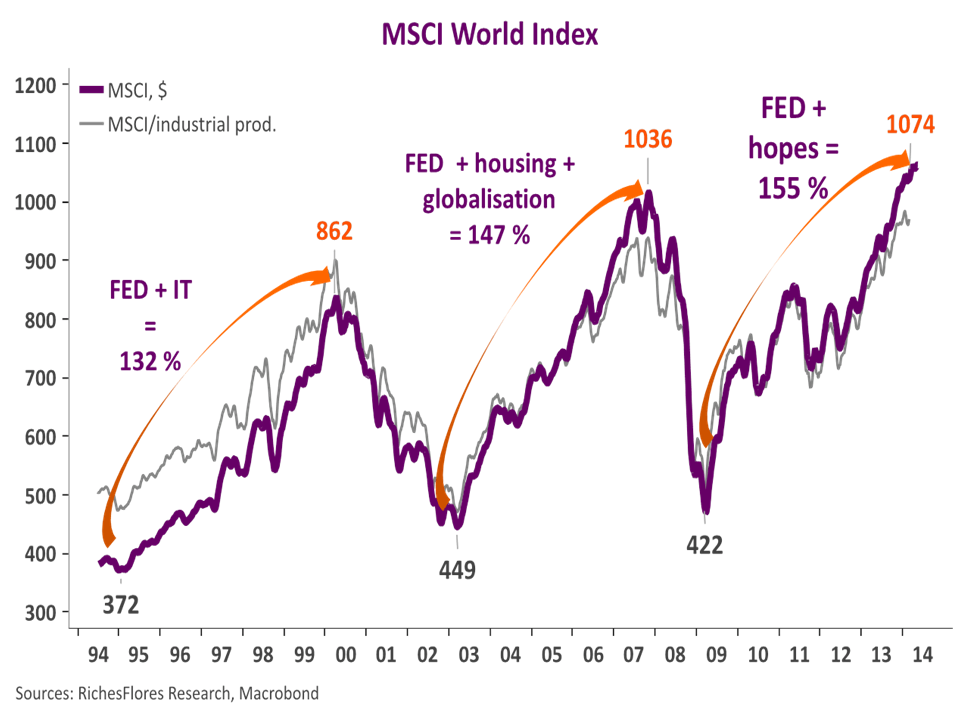 2014 is off to a positive start: U.S. growth is trending upward, the euro area is pulling out of recession, Japan is reaping the benefits of its competitive strategy, and world trade is picking up. All these bright spots should be enough to end two years of global deceleration and bring about a return to growth of over 3 percent this year. But while this is certainly good news, it doesn’t tell us much about the key challenges ahead. To understand them, we need to address the much more complex question of whether 2014 will usher in a second leg of the global recovery—one that is sufficiently sturdy to ensure a lasting upswing and leave five years of convalescence well behind us. As things now stand, we feel we still have two good reasons for assuming it won’t:

This suggests that we are in for a period of economic instability. We are therefore forecasting that after 3.5 percent growth in 2014, global GDP will increase by only 3 percent in 2015.

The upturn, then, is likely to be short-lived, yet it’s still a reality—meaning it will necessarily affect market expectations.

We are sharply raising our long-term interest-rate forecast for the first half of 2014, but we predict backsliding before the year is out. Needless to say, there will be timid attempts at returning to normal monetary policy in the first few months of the year, but because they are unlikely to get very far, our outlook up to mid-2015 does not involve increases in key rates by the leading central banks—the Federal Reserve, the ECB, the BoJ.

Although initially encouraged by the improved economic climate to press ahead with tapering, the Fed may soon find itself overwhelmed by largely uncontrollable jumps in long-term Treasury yields.

All in all, this should be a highly volatile year.

Is inflation, end-point of the financial crisis, around the corner?