Monetary policies have traditionally not been concerned with the subject of inequality, even when their role has been to help the economy achieve full employment. Rather, policymakers have generally limited themselves to a macroeconomic approach guided by statistics such as aggregate growth, inflation, unemployment rates and average wage rates. But in recent years, the subject has made its way onto the agenda of a growing number of central bankers.

Former Fed Chairwoman Janet Yellen set this change in motion and seems to have attracted a certain number of monetary policy followers. In the United States, Neel Kashkari, president of the Federal Reserve Bank of Minneapolis, has often voiced his support of this approach. In January 2017, with Ms. Yellen’s support, he even went so far as to create the “Opportunity and Inclusive Growth Institute”, whose mission is to promote research that “will increase economic opportunity and inclusive growth and help the Federal Reserve achieve its maximum employment mandate”.

In Europe, the topic has become an important factor in Mario Draghi’s adjustments to monetary policy over the last two years. As Janet Yellen began to do in January 2014 by developing a series of complementary unemployment indicators, so the ECB chairman has regularly made reference to labor market slack and called attention to the risk of relying solely on the unemployment rate, which has become less and less representative of economic reality. He regularly speaks of underemployment, forced part-time work and multiple jobs to justify the continuation of hyper-accommodative monetary policy despite clearly improved economic conditions in the euro zone since the start of last year.

END_OF_DOCUMENT_TOKEN_TO_BE_REPLACED

Trends in the financial markets have accelerated in the last few days. After hesitating slightly at the start of 2018, it is increasingly obvious to investors that reflation is around the corner. That belief is based on widespread growth, a surging oil price, the first positive effects of Donald Trump’s tax reform – with giant US companies promising to repatriate profits – and good news on investment and jobs. It is hard to see how that situation could fail to end the phase of latent deflation in the last few years and support expectations – seen throughout 2017 – of inflation getting back to normal. The impact of rising oil prices alone could significantly change the inflation situation, judging by how sensitive inflation is to movements in oil prices. If crude stabilises at $70 per barrel between now and the summer, inflation could rise by more than half a point in the industrialised world, taking it well above the 2% target that it touched only briefly in February 2017.

So what could prevent a significant increase in interest rates? It is very tempting to change our outlook for 2018. How is the interest-rate environment likely to develop?

END_OF_DOCUMENT_TOKEN_TO_BE_REPLACED

The last time U.S. unemployment fell below the 6.5 percent mark, the country’s GDP was growing at an annual clip of about 3 percent, real household spending was rising at nearly 4 percent a year, monthly job creation was flirting with 300,000, and annual wage growth was just over 2.5 percent. That was back in March 1994, but similar conditions prevailed in March 1987 and in December 1977. Each time around, labor utilization and capacity utilization were close to potential output—making monetary tightening to one degree or another the right choice. And each time around, a cycle of higher interest rates duly ensued. But in 2003 and 2004, the economic climate was entirely different. Not only had the jobless rate been stuck below 6.5 percent for about a decade; there wasn’t a single blip on the radar screen to suggest that the economy might overheat. So it wasn’t until mid-2004, with unemployment hovering at around 5.5 percent, that the Fed initiated a rate-raising campaign. A good many pundits would later criticize this belated adjustment, identifying it as a major inflator of the now-infamous real estate bubble. 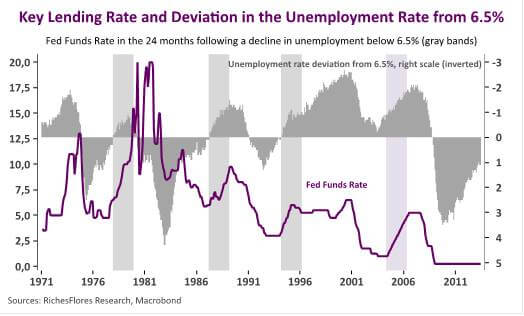 Thus, when it came time a few months ago to provide forward guidance on monetary policy, the Fed understandably selected the 6.5 percent unemployment mark as a key criterion for when and how to taper its quantitative easing program.

Even so, this policy choice raises a whole host of questions. A given jobless rate may in fact reflect a much shakier economy today than it would have during previous, seemingly similar periods.

The Gold Selloff as Warning Sign for Impending Deflation

Recent disappointment with a sluggish economy has altered perceptions about the risk of inflation. Since the beginning of March, ten-year inflation expectations in the U.S. bond market have shed 30 basis points, the sharpest decline in the past year. At the same time, plummeting gold prices bear witness to growing doubts about the reflationary policies pursued by central banks. Moreover, current global trends suggest that this sentiment won’t be changing any time soon:

All these developments should therefore encourage central banks the world over to go further with monetary easing.

“Tenkan, a term in several martial arts for a swift, 180-degree pivoting move, has provided the economist and Asia specialist Jacques Gravereau with an analogy for illustrating the ability of the Japanese people to carry out radical changes in direction collectively, flexibly, and energetically.”

Does the policy shift initiated a few months ago by the Japanese authorities qualify as tenkan? On this one, the jury is still out, but in any event, this experiment already represents a key stage in the crisis affecting the developed countries.

To highlight its importance, we are publishing two papers on this question. The first one, a brief attempt to put Japan’s deflationary episode into perspective, seeks to shed light on why the country was previously in so little of a hurry to deal with this affliction, and why it now feels compelled to take an entirely new tack. Download 1st article.

The second paper is by Frank Benzimra, a specialist on the Japanese economy and financial markets based in Asia for about ten years, who has been kind enough to share his thoughts with us. He begins by explaining how Japan managed to make it through fifteen years of extremely high public debt without lapsing into chaos. He then goes on to discuss the pioneering aspects of Prime Minister Abe’s new policy. In conclusion, he puts forward three possible scenarios for the outcome of “Abenomics,” along with the three investment strategies they imply. Departing from our usual practice, we are publishing this contribution in English. Download Frank Benzimra’s article.